A Ninja Living in the Mr. Robot World

You all know the television show Mr. Robot. If you don't know it, don't worry... it will all make sense soon. Anyway, after the Yahoo data breach we think it's important to talk about digital security and our place in the world of business and communication. I mean, Rami Malek won an Emmy for his performance in Mr. Robot so of course we should listen to his character Elliot - the world depends on it. Business - I mean life - depends on it.

"[We are] spamming each other with our running commentary of bullshit, masquerading as insight, our social media faking as intimacy."

Really. How many more rants do we need to see on social media about politics, whiny boyfriends, your cubicle-mate's smelly lunch, or your client's ridiculous requests? Maybe it's time to unplug. Social media is eroding our society and sucking the soul out of us all. So - delete it all. No more Facebook timeline, no more insta filters, and no more Snapchat faces. Purge and focus on the important things IRL.

"There's a powerful group of people out there that are secretly running the world. I'm talking about the guys no one knows about, the ones that are invisible."

Sounds like all those years of hard work and no recognition doesn't matter! You actually rule the world and you can feel good about that. So keep typing, clicking and creating away. One day someone might bring you a crown [read: cookie].

"We're all living in each other's paranoia."

Now's the time to change all your passwords. Actually, we think you should change them at least 3 times a day. Go ahead, set the alarms on your phone as a reminder and then in a week, change the alarm times. They're watching.

"No rest for the wicked."

That overtime? Working through lunch? Do you think Jett took a break? DB definitely didn't (we're honestly not sure what he does). So don't move further than a finger's click away from your computer. And if you're lucky someone might feel bad for you and bring you that last donut from the break room. Or not.

"I wanted to save the world."

Of course your work is making a difference. You're saving lives, making the world a better place. Every day we're closer to peace on Earth and solving world hunger and curing all the diseases. That's you. Pat yourself on the bat. Hero? You're a Ninja Hero.

Posted by Alliecine at 4:16 PM

It's that time again! No, not Naked Friday. It's time for the Ninja of the Week! Actually, it can be both things. Knock yourselves out.

Singapore paralympic swimmer Yip Pin Xiu has won 2 gold medals at the 2016 Paralympics - one for the 100m Backstroke, and one for 50m Backstroke. She's the first local athlete in Singapore to win multiple medals. She's a rockstar, and definitely deserves a NOTW callout!


via GIPHY
Maybe Corey Feldman is a ninja. You know, ninjas are often considered weird, and do things that - out of context - might seem odd. That's about the only explanation we've got for Feldman's appearance on the Today Show with his new band this week. His dancing was a cross between Michael Jackson and Criss Angel. If, you know, both of them were drunk. At least it was... entertaining? 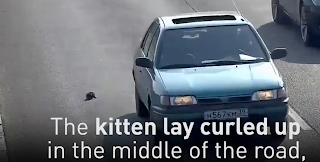 We dare you to watch this video and not cringe. This poor kitten was stuck on a Russian highway for THREE AND A HALF MINUTES in traffic, dodging cars like a... well, like a ninja. Finally, the kitten gets saved by a good samaritan who pulls over and rescues it from certain death.

Don't get us wrong - we hate ants. Like, HATE them. But you have to give them props for the way they work together and get stuff done. I wish our office was that efficient! Check out the article for not only facts about ants, but how to eliminate them from your office. The first step is not leaving any Red Vines behind at the end of the day...

Watch Office Ninja on Amazon or else you'll never get our inside jokes.
Posted by Alliecine at 7:29 PM