5 Things You Learn from an Office Ninja

Tomas and Raheem really have a go of it navigating their old-school boss and competing against a suck-up colleague who’s after the same promotion. If only they had a handbook…

1. Donuts
When your office decides to celebrate all your hard work by providing donuts you need to RUN not walk to the break room and devour as many as you can before your fellow employees get there. However, there may be a limit as to how many you can (and should) eat in one sitting. Your sprint to the break room probably won’t burn enough calories to break even eating one bacon maple donut. 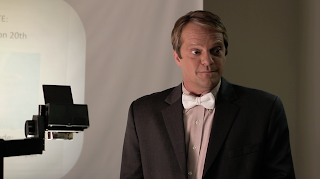 Just like public schools, some offices still sport technology from the 50s and 60s. One of the oldest devices still taking up space in conference rooms around the world is the overhead projector. We have engineer Roger Appledorn of 3M to thank for the widely used transparency projector system that still won’t die 70 years later. It’s hard to believe that these antiquated machines and self-driving cars co-exist in the same decade.

3. Spreadsheets
Organization, analysis, and storage of information via spreadsheet have come a long way over the years (IBM created the first computer spreadsheet in 1962!) but it’s important to stay with the times. Now with shared spreadsheets and project management apps we are able to get things done more efficiently (at least that's the idea). New technology can be overwhelming, however, for people used to doing things the old fashioned way, so take the time to train people to use this new technology. Making it accessible for your fellow employees makes things comfortable and easier (aka more efficient and faster) for everyone. Better business! If employees refuse to adapt, may we suggest you ninja their asses over to HR. Time is money and this ninja needs to bring home the bacon!

4. Costumes
Inspiration can come from anywhere and in this case, Tomas found his inner and outer Ninja in a box of Halloween Costumes. If you need a costume to help you find your mojo then so be it. Just think about it: how would your boss feel if the Wicked Witch of the West walked in and asked for a raise? Or if the Hulk demanded we upgrade the software for the computers in the office? Or if a Knight of the Round Table took over staff meetings? I see a lot getting done around the office with this tactic! 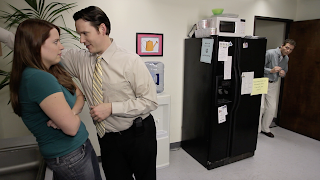 Office romance isn’t always the best idea but if you’re going to pursue someone may I suggest you don’t corner them in the break room (news flash: sexual harassment!) or shoot them with handcrafted office supply weapons. When in doubt, ask yourself: WWND? Hint: Ninjas are too busy for romance – at least that’s what HR told us.

Posted by Alliecine at 5:39 PM