It's that time of week again, where we look for our Ninjas of the Week. This week, we searched high and low, in crevices and cracks. And in breweries and tacos shops. What? Ninjas drink beer. It's a fact.

So without further ado, here's our Top 5 Ninjas of the Week!

Astronaut Scott Kelly spent an entire year in space and came back last week. He spent all of that time in ZERO GRAVITY, running experiments and doing tasks while floating around inside the space station. That's ultimate ninja-ing! On top of that, he actually grew TALLER because of the lack of gravity. Only a ninja could contort their body like that! This week Scott announced his retirement from NASA after logging 520 hours of cumulative space time over the span of his career. Congrats on your retirement, Scott, you deserve it!

This week, legend Bruce Springsteen kicked off his tour with a three and a half hour show in Los Angeles. The 66-year-old entertainer not only performed 21 songs while running around the stage, he CROWDSURFED. How many other sexagenarian's do you know that can crowdsurf and perform for over 3 hours?! Bruce has clearly studied the ways of the ninja, and has the stamina to survive anything that's thrown at him.

Speaking of aging heroes, on the new hit show Legends of Tomorrow a few episodes ago, the group traveled forward in time to the year 2046 and encountered The Green Arrow himself, Oliver Queen, hiding in the shadows of a destroyed Star City. Not only is Oliver still a bad-ass, he's doing it with ONE FREAKING ARM. How many one-armed ninjas do you know that can shoot arrows? Heck, even Queen's trademark green hoodie looks like a ninja outfit!

Basketball legend Kobe Bryant is retiring at the end of this season, and this week was his last historic meeting against the Cavs LeBron James. Kobe is a true ninja. He weaves in and out, all over the court, and always manages to find a way to get that ball in the basket. His speed and agility and ability to fly through the air make him the perfect ninja! In fact, maybe that's why he's retiring, he's going off to be a ninja...

5. THIS REDBACK SPIDER - NINJA OF THE WEEK! 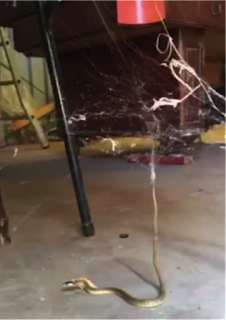 In Kalgoorlie, Western Australia, the menacing Redback Spider spun a web so sticky and large that she caught A SNAKE in it. That's right. A snake. And all of this took place in a woman's garage who heroically tried to save the snake after she caught it all on video! That spider is the ultimate ninja this week, catching a prey 100 times her size!

That's it for now, tune in next week for more ninjas!!
Posted by Alliecine at 8:00 AM