Hey everyone - it's Friday! You know what that means - shots of tequila at your desk at 4:59pm, photocopies of your unmentionables at 5:03pm, passed out in the bathroom stall at 5:07pm!

It also means it's time for us here at Office Ninja to highlight some Ninjas of the Week. These people (and animals) have exhibited powers that make them more than normal - we suspect they're all secretly ninjas. So let's get started!


There are two thing important to being a ninja - bravery and staying healthy. This week actress Cameron Diaz did both at once when she chugged a kale and salsa verde smoothie on live TV! Can you imagine?! That must have tasted just horrible. I mean, kale?!

Wolfsburg Soccer player Vieirinha was hit during a game this week, and SPIT OUT HIS OWN TOOTH as he got up. It's important for a ninja to keep going when they're hit, but man - this guy is hardcore!

Sam, the mascot of Morecambe Bay Primary School, was attached to a helium balloon this week and launched into space. While the rest of the equipment attached to the balloon was recovered, there was no sign of Sam. We think he used the opportunity to disappear deep in Japan and begin ninja training.

This also calls for a throwback to a very special moment in Office Ninja: NINJAS IN SPACE - the comic book. 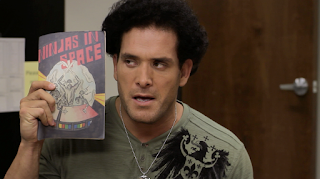 
Day spent well with sisters 🎢👭👭 #universalstudios #rollercoaster
A photo posted by Elaine Yeoh (@elaineyzj) on Apr 6, 2016 at 6:03am PDT

According to the news, these "riders" were stuck on a Battlestar Galactica roller coaster in Singapore. We think this whole thing is highly suspicious. This looks a lot like a ninja training center. And where are the riders in this picture?! WE CAN'T SEE THEM BECAUSE THEY'RE FRAKKING NINJAS.

The Star Wars: Rogue One trailer hit the internet this week, and actress Felicity Jones is the baddest, future ninja in the world - and of the week - as she takes the lead in the new flick. We can't wait to see how she ninjas the heck out of the Empire!


That's it for this week - see you next time around. Until then - try to keep your clothes on at work. No one wants to see that. Trust us.

Posted by Alliecine at 9:55 AM