It's Friday, so get those Ninja stars out, the beer open, and get ready for our Ninjas of the Week! Okay, maybe should you wait until you get home first. Or not. It really depends on how liberal your boss is with "rules"...

A cat in Bristol, England is causing problems for the local post office. Every time the mail gets slid into the slot of the door, he reaches out and grabs it with his claws. The post office is threatening to stop delivery, but the owner refuses to lock up his ninja, err, cat. We picture this feline dressed in ninja garb, deftly procuring the mail every day. We have half a mind to have a pizza delivered the same way and see what happens...

Beyonce dropped a new album this week with zero notice - just BOOM, HERE IT IS, BITCHES. Not only did she ninja that puppy into the charts (every single song was in Billboard's Top 100 at once, a feat that has never been done), she released a full length music video of the whole album. We're giving props to Bey for not only sneaking up on us, but for delivering a solid, brave record that deserves every ounce of praise it's getting.

A man in China this week who tried to get fresh with a woman in an elevator got an unexpected surprised when she ninja'd the crap out of him, and it was all caught on camera. Although there are rumors that the beatdown might have been faked, we're giving her the benefit of the doubt, if for no other reason than it's a great PSA for any guy who might try this. You don't know who's a ninja and who isn't until you're holding your teeth in your hand... 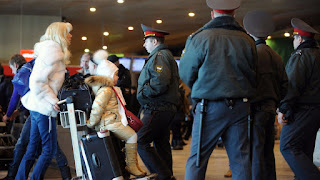 And 11 year old in Russia this week decided that she wanted to fly, and didn't seem to care that she had no ticket or passport on her. The girl managed to slip by security without inspection at Vnukovo International Airport in Moscow and onto a St. Petersburg-bound flight on Monday, according to Russian outlet NEWSru.com. When she landed, her family eventually got hold of her - the government put her on a plane back to Moscow. We have to give the girl props for her obvious ninja abilities. 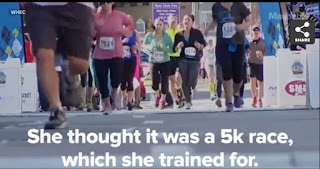 Speaking of girl empowerment, our #1 Ninja of the Week is 12 year old LeeAdianez Rodriguez, who thought she was running a 5K (about 4 miles), which is a feat in itself. What she didn't realize is that she was in a half marathon race (13.1 miles). So she kept going!! She completed the whole thing, despite having only trained for 1/3 the distance, and got a medal. That kind of ninja stamina and resilience is why she wins this week. She's a great example of what you can do if you want it bad enough. We should all go out and try to run a half marathon.

Or we could just sit here on this couch and finish off the extra large pizza left-over from last night. But we'll definitely start training next week. Or the week after.
Posted by Alliecine at 12:46 PM